I left Saint John on June 30, 2020, with friend, Janet, on a planned trip to visit the two covered bridges in York county. We stopped to pick up our mutual friend Frank, who lives in Fredericton. We headed north on the Trans Canada Route 2. Janet had googled directions and after we had followed them for a bit, we came to a place where the road was temporarily closed due to roadwork construction. We backtracked to follow directions that I had and fared no better, got totally lost. We stopped and asked a young boy working in a garage if he knew where we should go and he sent us back south down the highway. With the combined directions from the Department of Transportation and the use of Frank’s cell phone navigation, we finally arrived at EEL RIVER#3 (Benton) bridge. Benton is a small settlement but right beside the bridge there is a community park with picnic tables, a soccer patch complete with ball and places for other games. It was such a pleasant spot that we were sorry we hadn’t brought along a picnic lunch. It was time for lunch and we were reasonably close to the outskirts of Woodstock so we drove north to Murray’s Restaurant which is just off the Trans Canada highway. 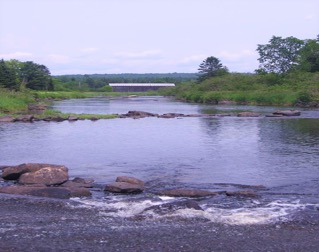 Benton Bridge photo taken by Kellie Blue (picnic tables up stream on this side also).

We left the Trans Canada at the exit which said Nackawic Millville and continued by heading toward Millville. The traffic signs are at a bare minimum. Sometimes we had to go by what felt right. Frank again used his phone navigation for Nortondale. Eventually we got there. There is a covered bridge sign on the Nackawic Siding Road but it is very easy to miss. We came to a junction of Nackawic Siding Road and a road, name I don’t remember, and stopped to look down Nackawic Siding Road, which, although dry, was very rutted. It was definitely a very rough track and for sure would be impassable after a week of rain or in the winter snow and ice. All Frank and I could see up ahead were trees but Janet thought she saw a pointed roof in the distance. She parked the car and said she would make her way walking down the road manoeuvring around the ruts and a downed tree. I have difficulty with walking without a cane, which I did not have with me, so opted to stay in the car. They both got to the bridge where Frank stopped to photograph both the bridge and the stream. Janet made her way back to the car and said she would use her 4-wheel drive to take me to the bridge. I was able to see and walk through the bridge. We then made our way back to Fredericton and then on to Saint John.

The day started in foggy Saint John but was perfectly sunny and warm in central New Brunswick. Getting to both bridges was through territory unknown to Janet and me and was a delightful trip. 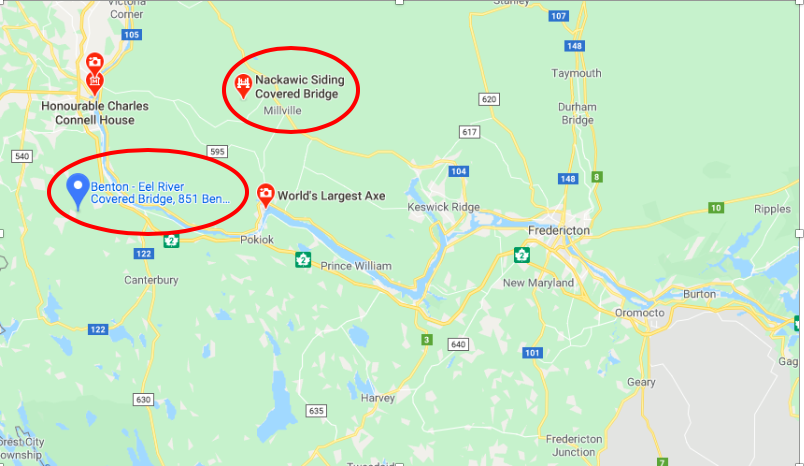 Consider bringing a picnic lunch or checking out the various restaurants in the surrounding area to make visiting the covered bridges in the York County an all day experience!