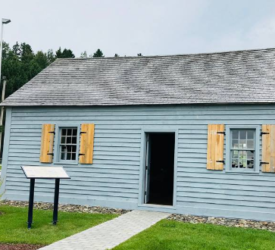 The Cyr house, the oldest house in Madawaska County, was built by Alexis Cyr between 1825. It is a true example of the building methods used by the first Acadian settlers.  Passed on from generation to generation until 1983, the house was purchased by the Madawaska Historical Society and moved to its current location in the community park, (Parc du Berceau).  The Alexis-Cyr House is an important testament to life in the olden days of the colony.