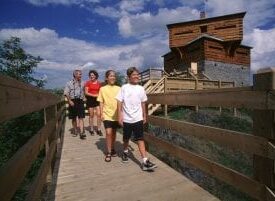 Reconstruction of a blockhouse built in 1841 during the Aroostook Bloodless War between the United States and Great Britain.  The Fortin du Petit-Sault was part of a defensive line that extended to Quebec.  It was destroyed by lightning in 1855, and rebuilt in the year 2000 to the original specifications.

The blockhouse is perched atop a promontory from which visitors can view the city and the confluence of the Saint John River and the Madawaska River. From there, guides at the P’tit Sault Blockhouse provide information of the battle techniques and lifestyle of the military who were posted at that strategic location in 1841–1842. The Aroostook War was based on a crucial issue: the delineation of the boundary between Canada and the United States.