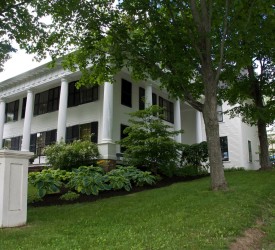 Tour the historic mansion’s four exhibit rooms, including an exhibit based on a local man credited with saving the birch bark canoe; an exhibit that includes 1000 historic musical instruments; and an exhibit that showcases some of Carleton County’s military history including a boy’s childhood collection of over 1,000 lead toy soldiers!

Monday to Saturday   9 am—5 pm
Closed : Sunday
There are few better locations for a real Victorian high tea than the historic Connell House, a restored 19th-century Greek Revival gem found in downtown Woodstock. Homemade scones with clotted cream, delicate sandwiches and a variety of tempting sweets are served on real china by staff in period costume, while a melody of piano tunes play in the background.  After your meal,