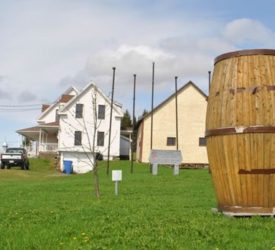 Museum in the time of prohibition…

The house of 1895 was the family residence of Maxime Albert. It is a good example of vernacular architecture from the Maritimes during this period. Maxime Albert is said to have been at the head of a major alcohol smuggling network. At that time, Maxime Albert would have even dealt with famous characters such as Al Capone and Sam Bronfman. Being a very influential businessman, Maxime Albert was very generous to his community. He donated land for the construction of the presbytery and is also said to have contributed financially to the construction of the village church.

This house represents the unusual history of the village of Saint-Hilaire. It is a true symbol of the golden age of its community. In 1979, the municipality of Saint-Hilaire acquired the site in order to ensure its conservation. Renovations were carried out, respecting vintage building practices between 1980 and 1985.